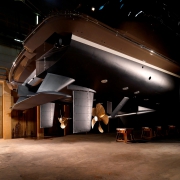 Even without Hull Vane, the hull shape of MY Alive is very fuel efficient, as it is based on the Fast Displacement Hull Form (FDHF) from Van Oossanen Naval Architects, the company where the Hull Vane was originally invented. Model tests at the Wolfson Unit showed unprecedented fuel economy for a yacht of these dimensions – and this was later confirmed at sea.

In November 2014, MY Alive was put to the test during sea trials on the North Sea. As the Hull Vane on MY Alive is integrated into the construction under the swim platform, testing without the Hull Vane was not possible. In July 2014, such back-to-back comparison trials were done on a 55 m Fast Supply Intervention Vessel, confirming the predicted fuel savings for that vessel of 10% at 12 knots up to 15% at 21 knots. The speed trials on MY Alive did however correspond exactly with the predicted resistance curve using computational fluid dynamics (CFD) software and model tests, which showed that the Hull Vane reduces the resistance by 20% at cruising speed. With her pair of 1.080 kW main engines, MY Alive reaches a top speed well over 16 knots.

As the Hull Vane was incorporated into the design of MY Alive from the beginning, it already saved money and space during the build: smaller main engines could be installed for the same top speed and smaller fuel tanks to achieve the same transatlantic range. The Hull Vane is a particularly attractive option for newbuilds, especially large yachts, fast commercial ships and naval vessels, as the cost savings on the main engines often outweigh the cost of the Hull Vane. So for roughly the same overall build cost, a ship can be built with more usable interior volume, significantly lower fuel consumption and better seakeeping in waves.

The main working principle of the Hull Vane is forward thrust: the hydrofoil generates a lift force in the upward flow under the aft ship. As this lift force is angled forward, a net forward thrust force is developed. The Hull Vane sometimes has been called “the bulbous bow of the stern” as it also reduces the stern wave created by the vessel and therefore the energy put into the wave system. Due to the vertical lift, the running trim is also influenced beneficially. As the Hull Vane dampens the pitching, rolling and yawing movements, the savings percentage is higher when sailing in waves, because the added resistance from ship motions is reduced.

The patented Hull Vane is sold exclusively by Hull Vane BV and its appointed sales agents. The Hull Vane is not exclusive to any design office or shipyard. It is suitable for relatively fast ships sailing at displacement or semi-displacement speeds, which corresponds with Froude numbers of 0.2 to 0.7. Besides superyachts, suitable ship types are ferries, naval and coastguard ships, offshore supply vessels, midsize container vessels and small cruise ships. 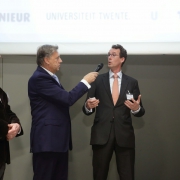 We’re proud to say that the Hull Vane last week got the second place in the Dutch engineering award for ingenuity called “Vernufteling”. On the photo you see Hull Vane inventor Peter van Oossanen explaining how the Hull Vane works.

The jury praised Van Oossanen for the Hull Vane design as the substantial reduction of fuel consumption gives a sustainable answer to the growing need for energy savings in the maritime sector. Peter van Oossanen was complimented for his perseverance in developing and optimizing the Hull Vane in the last 12 years up to the market-ready product it now is. Also important was that the Hull Vane is very exportable and already has been applied on several types of vessels with proven results.

The winning invention was a vertical greenhouse façade for buildings, which produces fresh vegetables and clean air at the same time. The newly elected “Engineer of the year”, Allard van Hoeken, works on affordable tidal power. So all top spots in the ‘Day of the Engineer’ election were claimed by environmentally friendly technologies.

The Hull Vane is a fuel saving device in the form of a fixed foil, located below the stern of a ship. It influences the stern wave pattern and creates hydrodynamic lift, which is partially oriented forward. This results in fuel savings ranging from 5 to 20% on suitable ships, such as ferries, fast supply vessels, superyachts and naval ships. The Hull Vane was invented by Dr. Ir. Peter van Oossanen and is protected by patents in all major shipbuilding countries.

The ‘Vernufteling’ election is organized yearly by the KIVI, the Dutch Royal Organization of Engineers. On the ‘Day of the Engineer’, the 18th of March 2015, the award was granted. 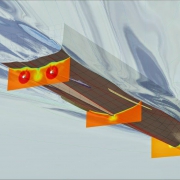 Van Oossanen Naval Architects is happy to announce a new commission for the complete naval architecture for a 40m FDHF Motoryacht, by a respected and promising client. This yacht will be part of a series newbuild semi-custom yachts.

Perry van Oossanen, director naval architect, states: “We received this order as a result of our proven concept of the optimized Fast Displacement Hull Form.  We expect to deliver a sporty and efficient design that meets the high end demands of our new client’’.

The build of this Motoryacht will start this summer and the yacht is expected to be delivered early 2017.  With this order, the quality concept of Van Oossanen is entering new and promising waterways. 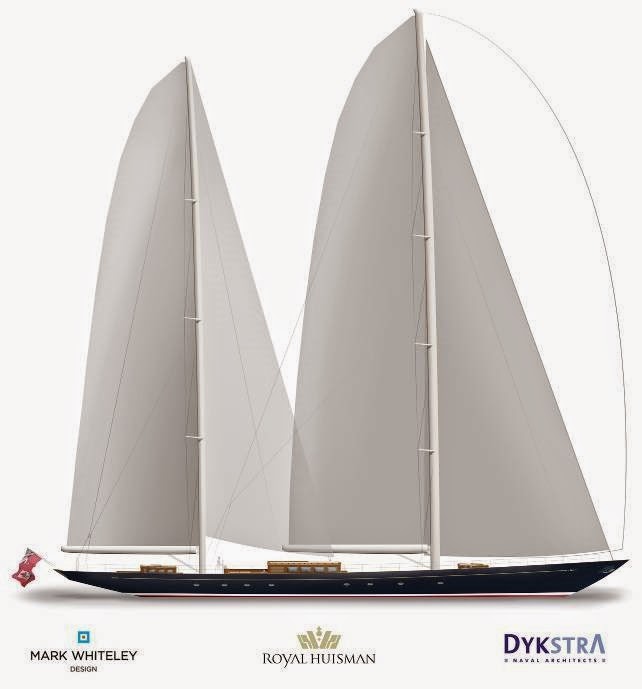 “The owner’s brief was for a stunning looking yacht for family enjoyment,” says Thys Nikkels of Dykstra Naval Architects. “We created a slender hull with long overhangs for an elegant and classic-looking yacht with favorable sea-keeping characteristics that are ideal for worldwide cruising. The generous sail area combined with her ketch rig and modern underwater body with fin keel and spade rudder will assure light air agility to her otherwise all round performance. We might see her in a Bucket regatta, but with below deck stowage planned for numerous toys such as a Laser, kayaks, windsurfers and bicycles she will be as much at home in a secluded bay as on the race course or the high seas.”

Rigged with carbon spars, booms and standing rigging scaled to an air draft that maximizes sail area whilst recognizing the Panamax height limitation, the design details feature oval portholes in the sleek, low profile dark blue hull, a circular skylight around the mizzen mast that promises to flood the owners suite with an abundance of natural light, and for added social amenity, A mid deck lounge area with sun canopy above. Whilst many details are yet to come, the yacht adds further distinction, having acres of uncluttered teak decking, a 6.2m / 20ft jet drive tender, large 3m / 10ft side boarding platform and twin helms socially connected to the large shaded main cockpit that adjoins an even larger glass rimmed deck salon at its forward end.

‘The interior will compliment her elegant profile and traditional lines with beautiful raised and fielded white painted paneling trimmed with an elegant but simple profile of fine varnished timber, says designer Mark Whiteley. “The brief called for a relaxed home afloat for the owner’s family and friends, and aside from a split-level master cabin featuring a private deckhouse and cockpit, the accommodation includes a large deck salon, three en-suite guest cabins, a media room and even a dedicated fully equipped gym. One cabin will serve as a bunk-room for the owner’s extended family with twin beds that can convert to a Queen double with a set of Pullman berths above. The gymnasium too will have an optional Pullman fitted. “

Due for delivery to her owners in the autumn of 2017, the yacht represents a collective ensemble of designers, project manager and builder, whose skill sets are being elevated by the encouraging ideas of a very thoughtful husband and wife team. Following delivery it will no doubt be an exciting maiden voyage for her as she pursues the trade wind sailing made famous in the Windward and Leeward islands of the West Indies. 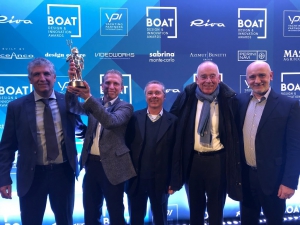